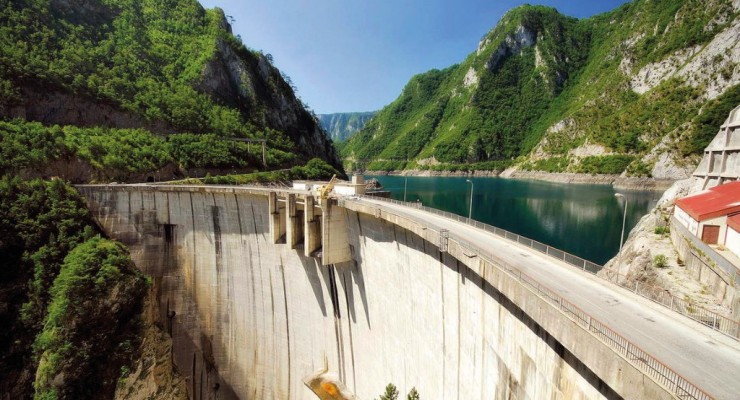 HPP Piva is accumulative dam facility with one of the largest concrete arch dam in the world. Due to the specific topographic features of the terrain, the complete plant of the hydro power plant Piva was made 230 under the ground. Planned annual production of electricity in HPP Piva is 860 GWh.

Elnos Group participated in two stages of modernization of HPP Piva, and those are reconstruction of 220 kV bus bars and replacement of measurement transformers and surge diverter, as well as lockers in the field and protection lockers in transmission and transformer 220 kV fields.

System of bus bars consists of three sections, three aggregates with two sectional HV separators and according to the dynamics of Voith Hydro and Electric Industry of Montenegro it was planned to reconstruct only middle section in 2012, in the period of 14 days, which is how long it took to totally shutdown Hydro power plant.

With engagement of three self-pro­pelled crane baskets and work in two shifts reconstruction of all three sec­tions of bus bars was performed in merely 13 days. Reconstruction of bus bars included the delivery and mount­ing of steel consoles for adaptation of the existing construction with new carrying isolators, mounting of carry­ing isolators and terminals (21 pieces), anticorrosive protection of the existing construction, mounting of aluminum tubes 55 m long by stage and replace­ment of primary connections from bus bars to cross connections between collecting isolators.