Dynamically at the Cirkovce-Pince project

The teams of Elektro novi sistemi (ENS), a Slovenian member of the Elnos Group, are successfully performing works on the construction of the 400 kV transmission line Cirkovice-Pince, which is one of the most significant undertakings in the modern energy Slovenian history. This is a project of European importance whose goal is to establish the first high-voltage connection between Slovenia and Hungary.

After the works in the GIS plant are completed, the ENS team is preparing to relocate 110 kV cables. The teams are also working on the reconstruction of the systems of own consumption in the old substation building.

Most of the work entrusted to our teams in the internal parts of the substation and the  400 kV switchyard should be completed by September this year.

ENS teams are currently successfully performing the installation and tower erection on the Cirkovce-Pince transmission line. Within this stage of work, our skilled teams will mount more than 1,400 tons of steel structures. The height of the towers reaches over 50 meters.

The interesting fact that the ENS teams will install 2,600 meters of the system for safe towers climbing, which is a size that almost reaches the top of the Triglav, the highest mountain in Slovenia.

According to the contract, all works on the SS Cirkovce-Pince should be completed by the end of this year; the deadline is the end of March 2022.

Reconstruction of the Cirkovice-Žerjavinec transmission line

The large project Cirkovice-Pince also includes works on the relocation of the 220 kV transmission line Cirkovce-Žerjavinec, where ENS teams have also a part. The last measurements of the safety height of the conductors are in progress, and in the last week, the transmission line was commissioned.

Through the implementation of the Cirkovce-Pince project so far, the ENS teams have confirmed that they are masters of multitasking and that they are capable for performing a wide range of different works that require a variety of expertise and the ability to adapt them quickly. 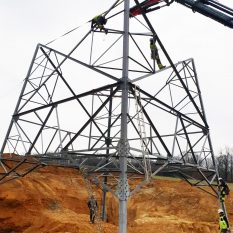 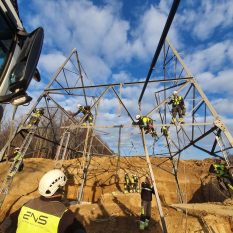 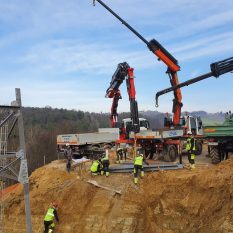 Project "Aqua" – mission to remember…
Construction of the substation Olingan in…