Transmission lines for times to come

Thousands kilometers of installed and dismounted transmission lines at all voltage levels up to 400 kV, throughout Europe, together represent an impressive range of references containing merits for Elnos Group to be recognized company in Europe.
For years now, Elnos Group teams have become known for detailed, practical and efficient approach to projects, and thanks to a series of successfully performed projects, our partners happened to be electrical power distributive companies and leading investors of electrical power production facilities.
Confirmation of professionalism is best evident in realization of numerous capital projects of strengthening energy transmission capacity.Our teams become known for not accepting fact that there were tasks that had no solution for. Such an approach brought us to the position of international concern for electrical power engineering.
We believe that future projects will shoe our realistic capabilities.

Nowadays, Elnos teams successfully mount and dismount wide range of transmission lines efficiently and using most modern equipment.
We pushed boundaries of our capabilities through each new performed project and created teams, which, we proudly say, successfully mounted and dismounted thousands kilometers of transmission lines throughout Europe.
One of capital projects truly portraying our skill is performance of electrical assembly works within Swedish project of constructing South West link 2, which was one of the biggest electrical engineering projects in this country. In the frame of this project, Elnos teams dismounted towers and performed electrical assembly works of new transmission line 400 kV Hallsberg-Brakeryd, section 45 kilometers long.

Numerous references in the field of transmission lines, where we performed entire range of most different works and faced a series of challenges, include following transmission lines: 2×130 kV Barkeryd-Nässjö, 130 kV Storfinnforsen-Ögonfägnaden and Ögonfägnaden-Isibillstjarn. 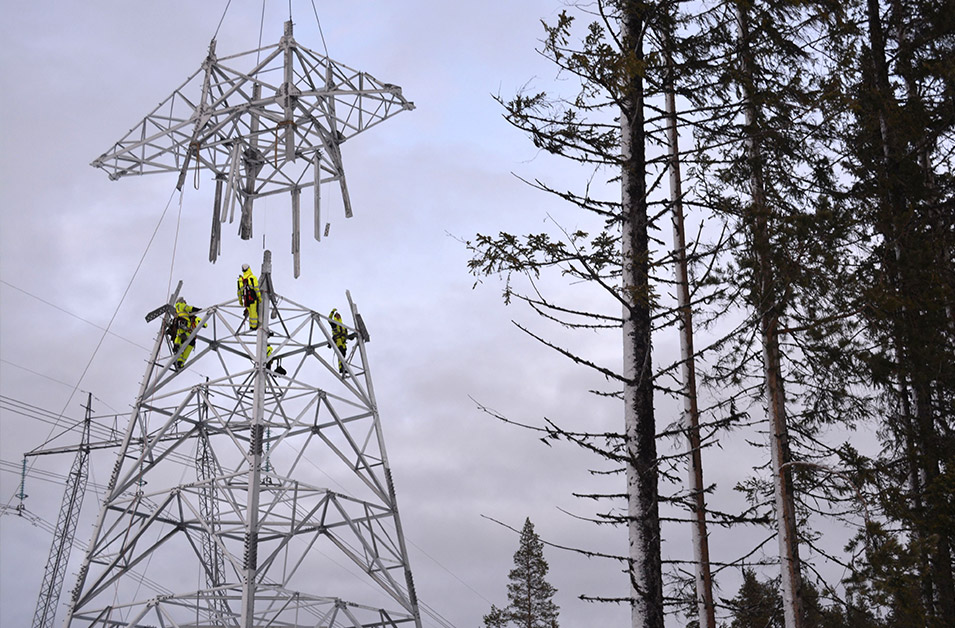 Our teams are equipped with state-of-art equipment and special mechanization that provides us to perform our tasks with maximum quality.
Fact that we mounted 70 meters high and weighing 120 tons towers puts our teams into teams of top contractors in electrical power engineering.
References and experience we acquired provide us with possibilities to participate in capital infrastructural projects in future.

Shortest definition for term expert offers simple explanation and says that you became one if you own and apply top knowledge and skills in certain field. Our teams earned this flattering title by investing time, knowledge, effort and creativity in OPGW field.
Devotion and practical approach to work in the years behind us enables us to install more than 2,400 kilometers of OPGW in BiH, Serbia, Montenegro and FYR Macedonia.
However, while performing this type of works, we did not limit ourselves to our region only. Our teams bravely responded to the most challenging projects in this field throughout Europe and successfully installed OPGW network in inapproachable areas of Sweden and Iceland.
So, today, successful realization of installing 130 kilometers long OPGW within engagement in the project TL 400 kV Hjalta-Vittersjo is next to the name of our company.

One of expert examples certainly is installation of OPGW and appertaining equipment along 25 kilometers long section of 110 kV transmission line Kličevo-Brezna in extremely inaccessible and harsh mountain conditions in Montenegro.
It was an endeavor like no other, one of those that launched us in the group of OPGW experts – title we are going to invest in and take care of.

Each performed project in the field of electrical power engineering is a demanding in its own way, but, among them, those performed in extreme conditions are the ones to be remembered especially.
Number of extreme endeavors and great victories of our teams and mechanization over harsh terrains, especially in Nordic countries, is ever increasing.
Fantastic resourcefulness of our employees, their adaption to various environments and working conditions provided Elnos company name to be seen as top contractor.
For example, Elnos Group completed its first project in Iceland – reconstruction of 220 kV transmission line Sigöldulina 3 – six days before deadline in spite harsh nature of the Arctic Circle transmission line is situated in.

We overcame great challenges in lava fields in Iceland, working in extreme cruel conditions of the project of constructing two transmission lines: Þeistareykjalína 1 and Kröflulína 4. Towers of this section weighed up to 26 tons and were up to 21 meter high.
We achieved one victory after another and created teams for realization of the most demanding projects of the future through realization of projects such as these and similar ones.

Elnos teams realized projects in zones where the work performance is regulated by special legal regulations. These are ecologically sensitive zones being parts of network of protected natural areas in the EU – Natura 2.000.
One of the most remarkable examples of this type of engagements is work performed on the project of South West link in Sweden. In the frame of this project, we successfully performed tasks obeying bans of obeying bans to use vehicles, machinery or to walk on the ground at all, and works were performed manually or supported by helicopters. This was a projects realized in accordance with top European and world standards.
Trying to respond work performance challenges in protected areas in high professional level, we put a lot effort and managed to push boundaries of our capabilities in this field of work.
One of better known tasks, which confirmed out step out, was preservation of naturally protected areas within project of constructing 130 kV transmission line Moliden-Sidensjö in Sweden.
In one part, this transmission line goes through protected ecological zone where work performance rules were very strict. Movement was not allowed at all in one route area. It was a protected ecological zone with a special plant species, which are about to be extinct. A part of the project was performed in the way that helicopter stretched rope over the towers. Afterwards, our machinery set conductors and OPGW over ropes. Elnos Group accomplished one of the biggest professional challenges in Sweden by this reference. 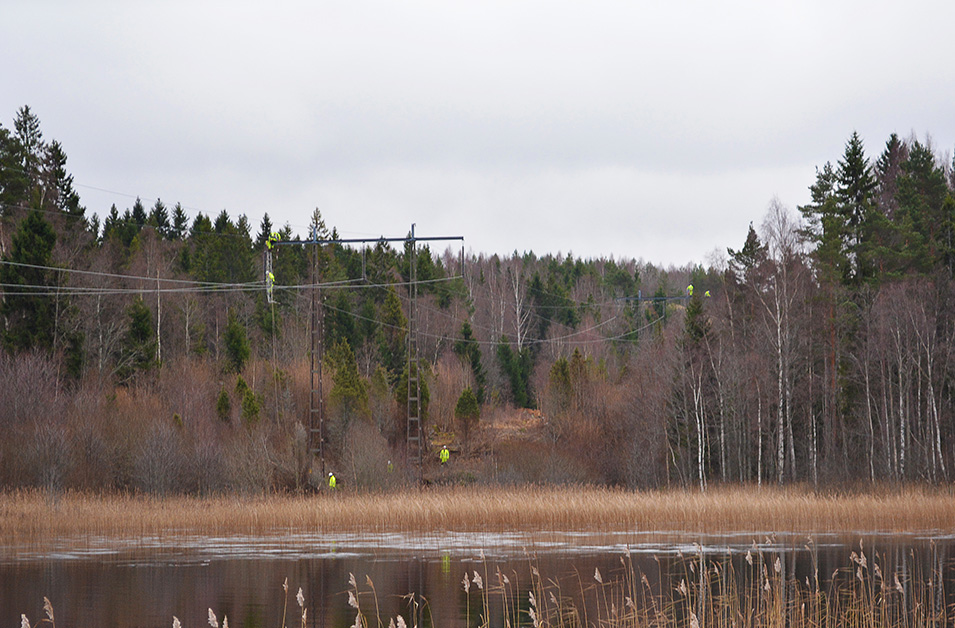 Construction of transmission lines Þeistareykjalína 1 and Kröflulína 4 in Iceland was a project in which our teams successfully finalized works in lava fields legally protected as natural wealth of this country.
In the years behind us, Elnos tams proved it was possible to minimize negative impact on environment in project performance as much as possible. We hope we are going to face more new surprises and challenges in this area in the upcoming years.

Maintenance is the key

Business concept of building trust is a key value in relation to partners, and it is achieved through constant development and improvement level of service.

Due to this, Elnos Group engineering tries not only to provide maintenance but also to improve the work of electrical power facilities. This also means our direct presence in the structures in warrantee and post- warrantee period.

Elnos Group is a reliable partner for performing regular and emergency maintenance of electrical power facilities. So far, we have successfully performed a series of projects on regular maintenance of facilities in Serbia, BiH, Montenegro and Slovenia.

As for regular maintenance, we can set aside those in Oil Refinery Brod, Thermal Power Plant Kostolac, as well as regular maintenance of all EMS transmission lines in the Republic of Srpska, whose length expressed in sections amounts to around 134 kilometers.

One of descriptive examples of hiring our team in extraordinary situation is big repair caused by rain and wind on 110 kV transmission line Požarevac-Petrovac in Serbia. Due to failure on this transmission line, Majdanpek inhabitants had a power cut for four days. Thanks to superhuman efforts by our fitters and other teams in the field, transmission line was rehabilitated and normal life was provided for this town.
Good practical example of our engagement in this field of work also is successfully completed upgrade of 110 kV transmission line Logatec-Žiri in Slovenia after it suffered failure. This project included mounting and erecting 72 two-system towers, which ensured electrical power stability for population living in the area. 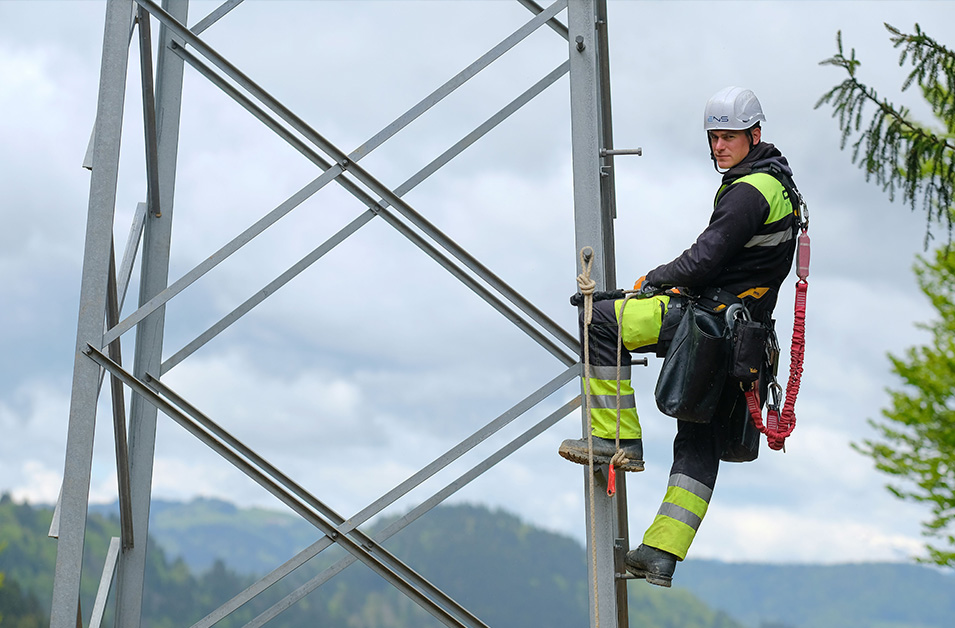 Elnos Group completely covered a range of maintenance services being of vital significance for reliable operation of any system whatsoever.
Actually, we provide the following services: from initial testing and testing of equipment, performance of all necessary activities, to final testing, issuing reports and commission of equipment and systems.