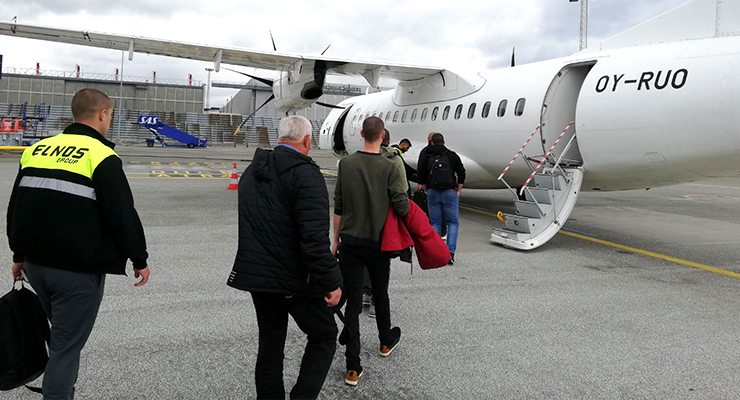 Two specially realized charter flights for Elnos Group workers and one large project of national importance for Iceland yesterday, symbolically marked the beginning of the end of air barriers that closed airports across Europe two months ago.

The plane with the workers of Elnos Group taken flight yesterday morning from Banja Luka Airport to Copenhagen, and then to the capital of Iceland, Reykjavik. Our workers from Banja Luka were joined in Copenhagen colleagues from Northern Macedonia, whose flight to Denmark took place at the same time as the air transport of their Banja Luka colleagues.

A group of 14 our workers will join the 14 employees who are already in Iceland. Together, they will continue the implementation of a project of national importance for the most northern European country – the construction of a new 220 kV transmission line Kröflulína 3.
Postponing the construction of this transmission line was not an option for the investor and Elnos Group, because it is a project of state importance, whose realization our company started last year.
The construction of the 121 km of new 220 kV transmission line Kröflulína 3, which will connect the Krafla geothermal power plant and the Fljótsdalur hydro power plant, is of great importance for raising the level of stability of the electricity network in the north and east of Iceland.
As a part of the construction of this transmission line, our teams have been entrusted the comprehensive task of assembling and lifting of 328 transmission line towers, with height of 31 meters. It is a project that carries a high degree of complexity, because the route crosses over harsh mountainous areas and rivers where relentless weather conditions prevail.
Elnos Group has been operating in Iceland for five years and this is the company’s seventh and the largest project in this market. The workers team in Iceland will be even bigger from July and will number more than 50 fitters.
Our company performs work on power facilities of national importance for the countries where we operate, which is why since the beginning of the corona virus pandemic, we reacted quickly, using air transport for workers and truck transport for equipment and machinery, timely transfer people and machinery to the necessary locations around Europe.
We are proud of the fact that in the current circumstances, with the most responsible and efficient work, we have managed to realize move forward that announce the return to standard working and business conditions.