Five years in the green heart of Europe

For Slovenia, green is much more than a color. It is a way of life. This country strives for safe, powerful, and modern energy solutions that support a modern lifestyle. Here is how we have played our part in the energy story of this country so far.

They call it the green heart of Europe and it is paving the way for its green energy transformation at an accelerated pace. The energy story of Slovenia, a country whose inhabitants respect nature almost religiously, is a dynamic and exciting journey. Being a part of this adventure is an important task for the employees of Elektro novi sistemi (ENS), our Slovenian member, which they consider a privilege.

For the green energy future that Slovenia desires, it is necessary to implement many modern energy systems and solutions. It is precisely here that the teams of our ENS enter the energy scene of this country in full glory.

When ENS started working within the Elnos Group five years ago, no one could have guessed that in such a short period its teams would realize more than 360 projects. At the same time, the number of workers of our largest European member has more than doubled.

The ENS resource center consists of a team of engineers and electricians with rich experience and references. In their composition, they also have a group of experienced certified installers for the installation of 110 kV cables, which constitutes a significant part of the company’s portfolio for the Slovenian and European markets.

ENS teams are characterized by high motivation, expertise, and true mastery of multitasking, and together with other Elnos Group teams, they have so far been part of projects in: Iceland, Norway, the Netherlands, Montenegro, and Serbia.

The first high-voltage connection between Slovenia and Hungary

Slovenia is an important hub of European energy routes, which is why it strives to create an increasingly powerful and modern energy infrastructure, and which is also why a large number of important and capital energy projects have been taking place on its soil for years.

The construction of the first high-voltage connection between Slovenia and Hungary, known to the public as Cirkovce-Pince, is one of the most significant projects in the modern energy history of this country. As part of this project of European importance, a 2×400 kV transmission line Cirkovce-Pince was built on a route 80.5 kilometers long, and 284 transmission poles were erected. 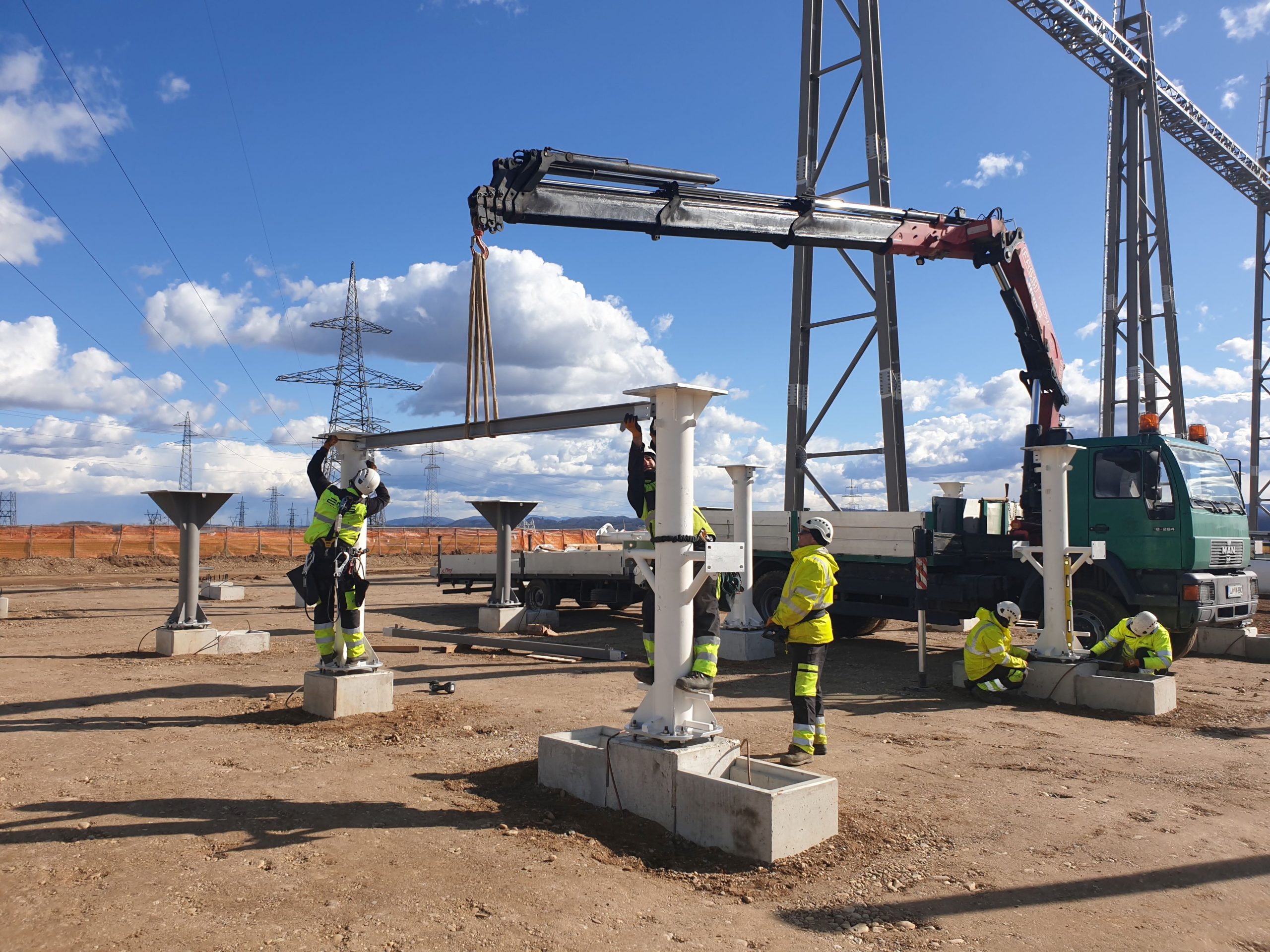 As an important part of the army of contractors engaged in this undertaking, the teams of ENS Slovenia have confirmed themselves as an unrivaled team. As part of this project, they have so far implemented several delicate and demanding tasks.

At the location in Podravina Slovenia, the ENS teams successfully carried out the works entrusted to them within the framework of the reconstruction and upgrading of the 400/110 kV substation Cirkovce, the starting and most important point of this project. After that, within the same undertaking, the teams have reconstructed parts of the old ones and were an active part of the construction of the new 2×400 kV transmission line.

Energy hub for the future

The 400/220/110 kV Divaca substation is one of the key hubs in Slovenia’s power grid. It has earned this status because it supplies electricity to a wider area of two regions of this country, and the substation is of great importance for energy exchange with the power systems of Italy and Croatia.

As part of the reconstruction and upgrading of the Divaca substation, the ENS teams carried out a wide range of electrical installation works in all switchgear bays of this substation.
The project was realized at the time of strictly defined time shutdowns of the network in 400 kV fields, and precisely in that period the ENS teams confirmed an enviable level of knowledge and practical approach to work.

As part of this project, our teams also carried out works that are part of the internationally important SINCRO.GRID smart grid project, which is of great importance for more efficient exchange of electricity between Slovenia and Croatia in the future.

Infrastructure projects in Croatia and the Netherlands

The energy supply projects of two factories of the company “Calcit” in Gospic in Croatia and the Dutch city of Terneuzen are also particularly important for this member. The work carried out in the first factory was ENS teams first independent project, while the work in the Dutch “Calcit” was the largest undertaking of its teams outside of Slovenia. 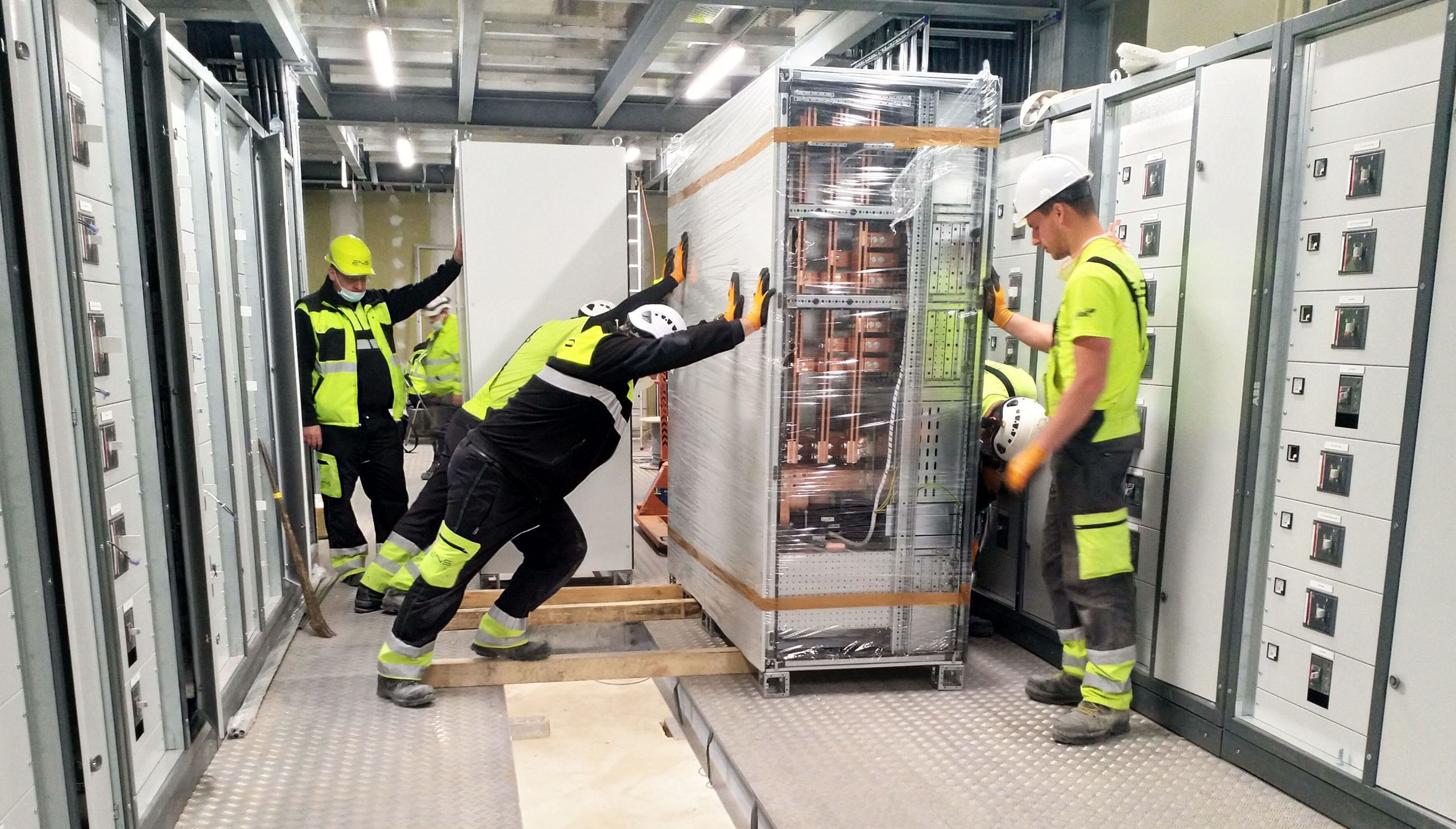 This project is at the same time one of our company’s first significant step forward in the field of production to the EU market, because electrical cabinets manufactured in the Banjaluka Electrical Assembly Workshop were installed.

Dismantling of transmission lines with the support of a helicopter

One of the working moments that the ENS teams will surely remember for a long time is the spectacular dismantling of the steel structures of the 20 kV Zidani Most transmission line. 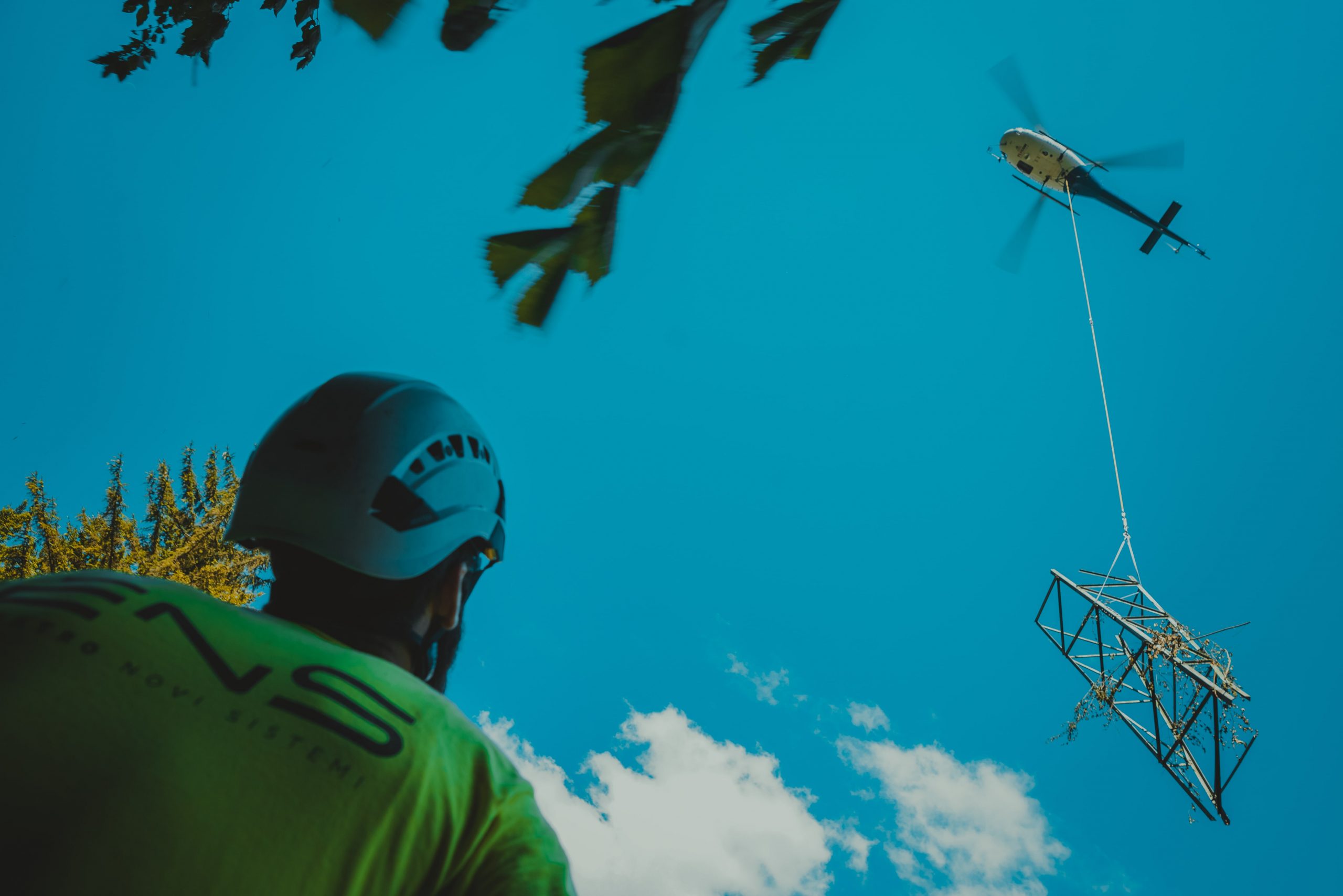 The steel structures were in an inaccessible place, so the work was carried out with the help of a helicopter. With the high expediency of the ENS teams and the excellent coordination of the machinery, this task was successfully completed.

Not in my backyard

Faced with the standard of modern quality of life that bears the motto “Not in my backyard”, modern energy tends towards the greatest possible application of power solutions that fit better into the environment. One important task aligned with this standard was realized by the ENS teams last year and this year in the small medieval town of Skofja Loka. 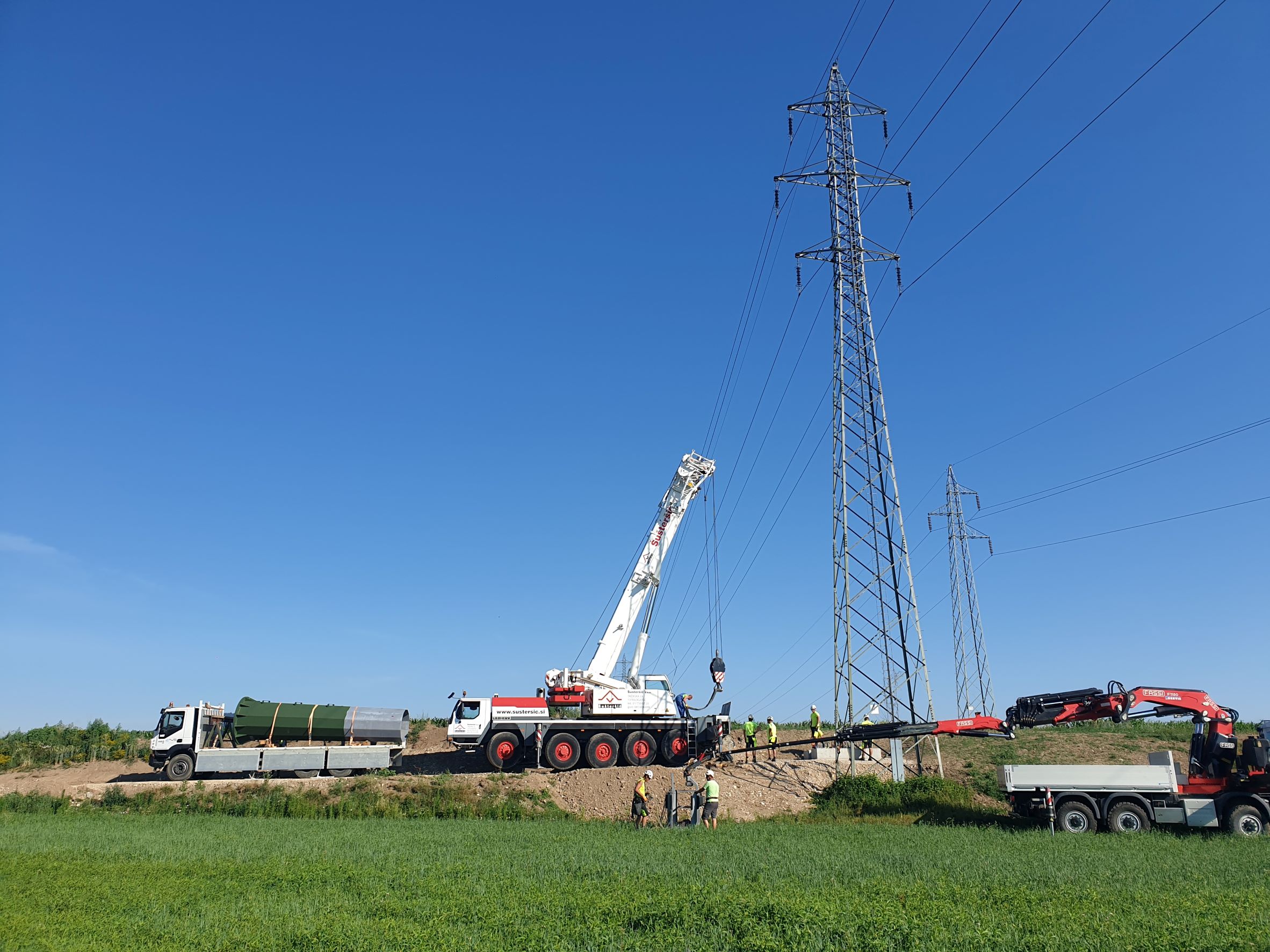 This was a project in which the ENS teams carried out work on the connection of the new 110/20 kV Skofja Loka substation with the GIS high-voltage plant, which belongs to this category of modern plants.

The challenge of Slovenia’s biggest task

The construction of the second track of the Divaca-Kopar railway is definitely among the projects that will be written down in the railway history of Slovenia in a special way.
Due to the accelerated development of the port of Kopar and the need to better connect it with the hinterland, the construction of a new section of this route has begun, which trains will be able to run at a speed of 160 kilometers per hour. This undertaking ranks as one of the most important and demanding infrastructure projects in Slovenia. 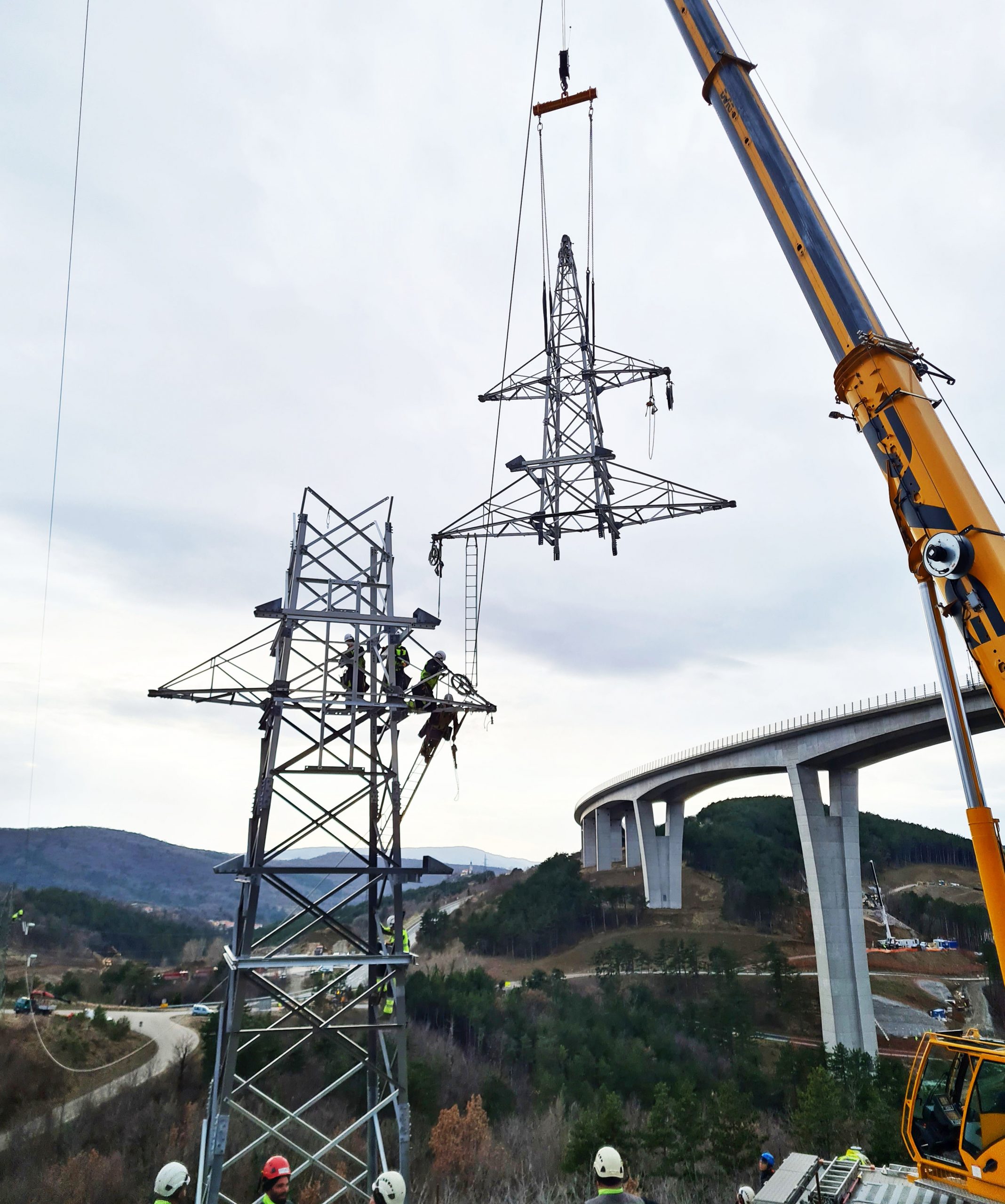