Our decade in Sweden

With its original and innovative green formula, Sweden is writing one of the most successful energy stories in the world. Our dedication to their energy journey has lasted for a decade and we look forward to its continuation.

The goal of Sweden’s energy policy is to reach 100% power from renewable sources by 2045. Sounds incredible, doesn’t it? Well, the Swedes don’t think so. They build their way to this goal through innovation and partnership with companies ready to be their allies on this path. Exactly ten years ago, we accepted this challenge and since then we have become part of the most important energy stories of this country.

The creation and expansion of innovative green solutions is a confirmed work recipe thanks to which Sweden ranks as one of the most globally advanced energy markets in the world. This country consumes the most energy per capita in Europe, and today about 75 percent of the country’s electricity production comes from nuclear (30%) and hydropower (45%). This Nordic country sees itself as uncompromisingly green in the future, and being part of such an important path is an invaluable experience for us.
Entering the Swedish market was the first international step of Elnos Group, and at the time, ten years ago, the decision of our management was seen as very brave. Today, data on the number and type of our references best speak of the importance of our status in this country.
To date, Elnos teams have implemented more than 70 projects in Sweden in which they modernized some of the most complex facilities and power infrastructure systems. Last year alone, more than 160 workers from the entire Group were sent to implement power projects throughout the country.
The home address of our Swedish member Elnos Nordic in Västerås has long since become a place where many Nordic companies have found a reliable and professional partner. Today we can freely say that Sweden is our second home.

Our result – 1,300 kilometers of transmission line

So far, our teams have built and reconstructed about 1,300 kilometers of transmission lines in Sweden, which is a figure that seriously approached the length of this country. In the previous decade, Elnos’ transmission lines teams were at the forefront of more than 50 of the most significant and challenging energy projects, including a significant number of capital projects.

The construction of the Hurva-Sege transmission line was one of the most significant energy projects in Sweden in 2021, and at the same time our most complex task on Swedish soil.

One of the capital projects that is a true indicator of our skills is the realization of works within the project of construction of Southwest Link 2, which was one of the largest energy projects in this country.
Elnos teams installed poles and electrical installation work on the new 400 kV Hallsberg-Brakeryd transmission line, on a 45-kilometer section. 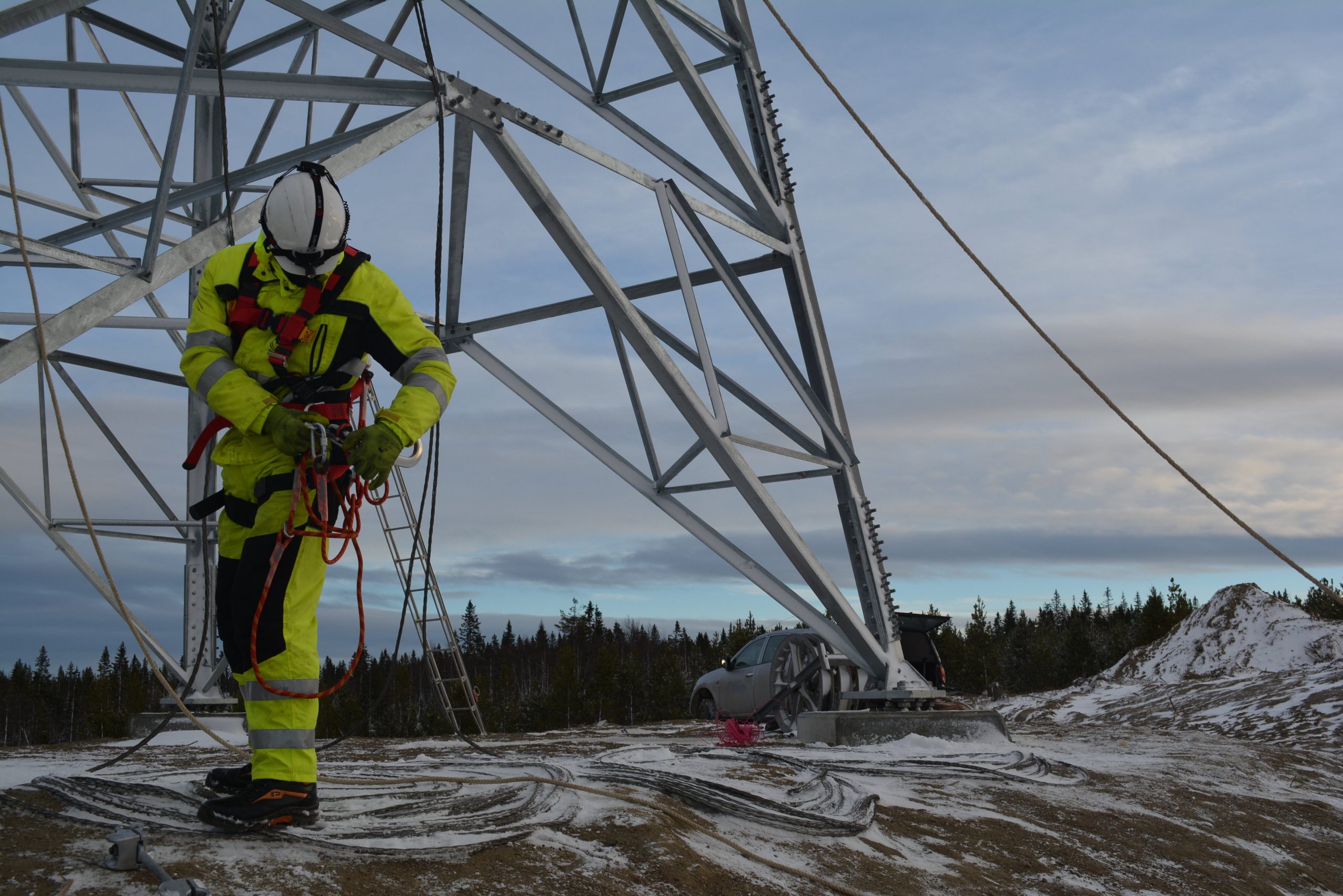 A stunt for the future

The construction of the 2×130 kV Barkeryd-Nässjö transmission line was one of our first projects on Swedish soil. As such, it represents an important step for Elnos Group towards the Nordic and EU markets. Our crews dismantled the old and built 11 kilometers of the new transmission line across the swampy ground while respecting the highest level of measures to protect the historical heritage of this country, which abounds in the city and its surroundings.

Substations – guardians of the country’s stability

With the successful construction and reconstruction of substations, we have confirmed that Elnos Group is an extremely important link in the creation of a strong energy network in this country. So far, we have reconstructed more than 20 substations on Swedish soil, which are the guardians of the country’s energy stability.

The realization of the “Aqua” project is proof of the ability of our teams to simultaneously, practically in parallel, realize complete electrical installation work on three demanding 130 kV facilities.

During these ten years that we have been working on the soil of Sweden, a very serious reckoning of this country with its old nuclear energy sources has been going on. One of the old nuclear power plants that is part of this process is Barsebäck. 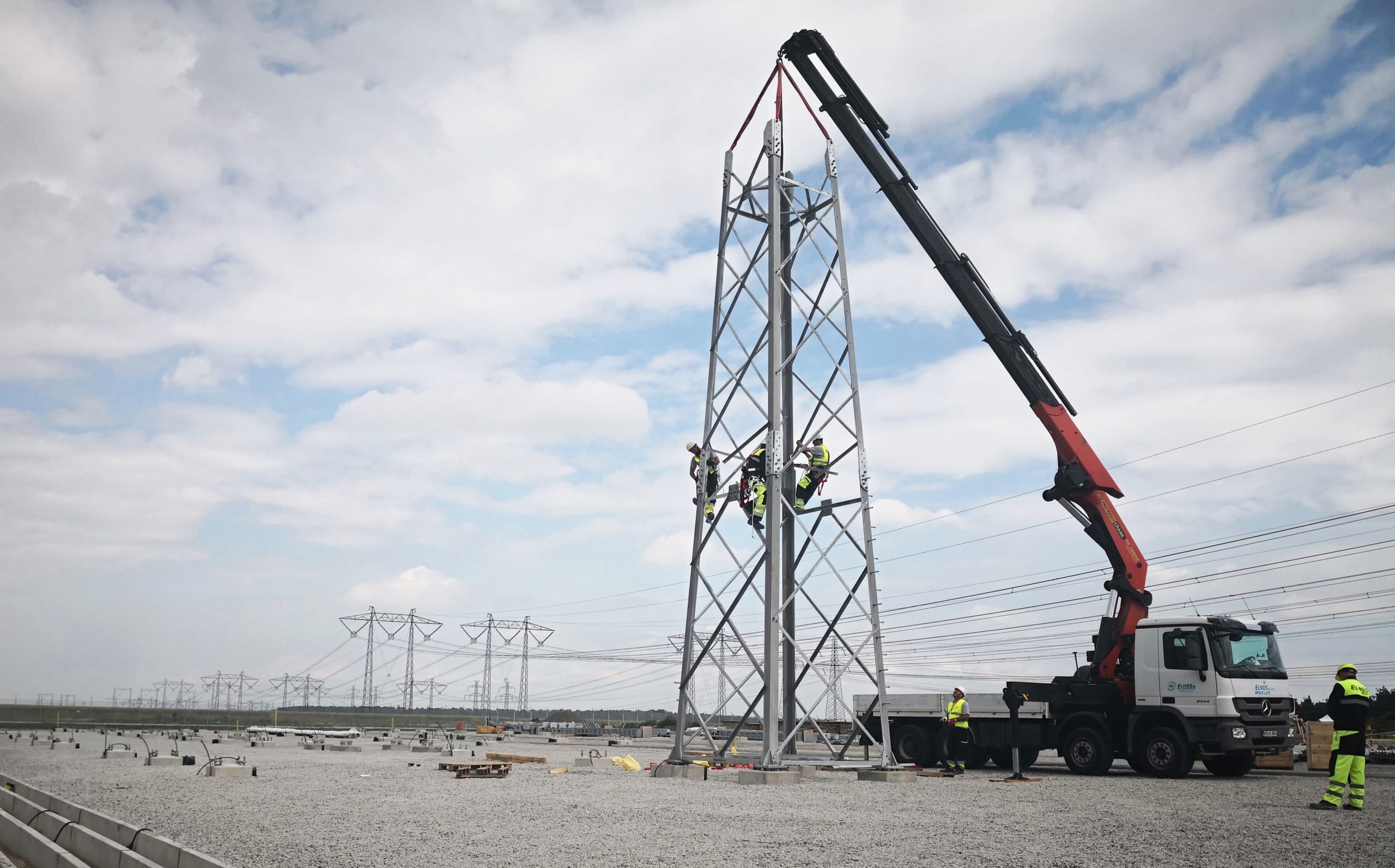 Temperatures that reach below minus 30 degrees Celsius, work in arctic circles, swampy and impassable ground, strong gusts of wind, have become everyday for our teams in the field. So far, they have won a series of great victories over the harshness of the terrain and climate of this largest Nordic country.

On the shores of Lake Mälaren, one of the busiest waterways in Sweden, we managed to do a stunt that caused the admiration of the Swedish public. 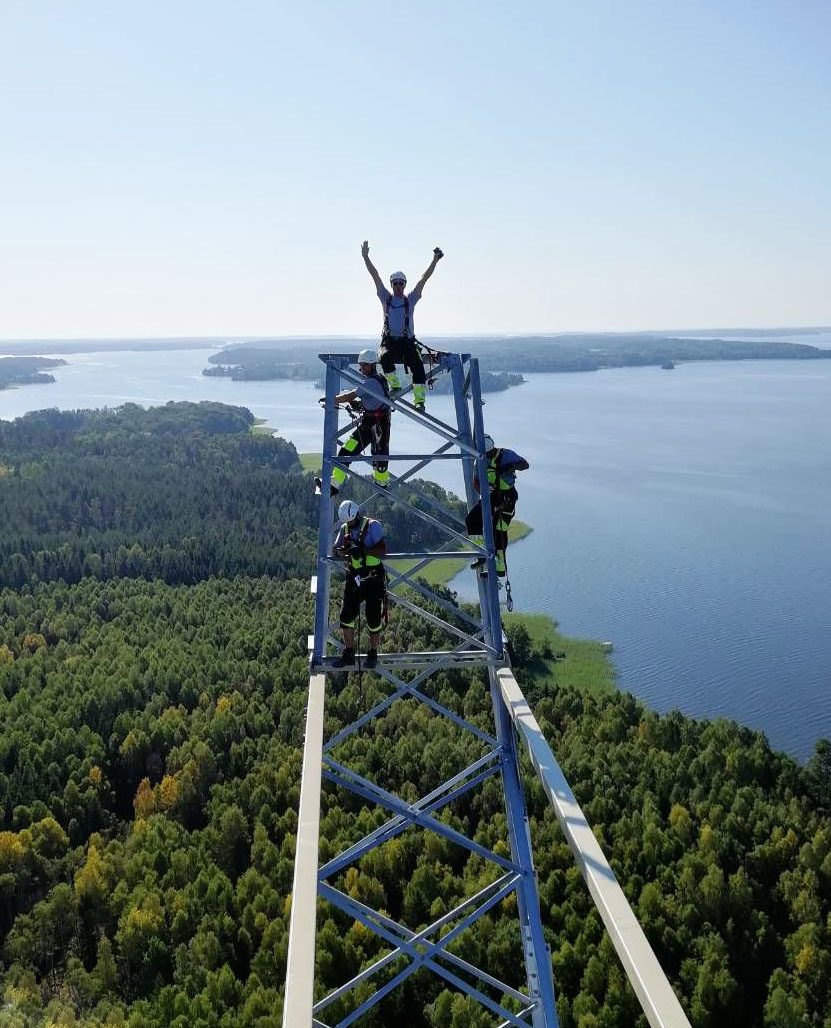 We dismantled two transmission poles 73 and 75 meters high on the Hamra-Åker transmission line, in order to erect new poles 86 and 100 meters high!
This was a stunt that inscribed the name of our brave team in the history of the new energy future of this Nordic country.

In the arctic circle

Porjus is the name of one of the oldest hydroelectric power plants in Sweden, whose turbines first started spinning more than 100 years ago. The substation is located in the arctic circle where thick snow cover is a regular occurrence during most of the year.

The old plants of this substation are today a museum, while its new plants produce 465 MW of electricity. Our teams performed complete electrical assembly works in the 130 kV plant of the new 400/130 kV substation Porjusberget.
Within this project, our teams overcame a series of professional challenges from extreme weather conditions, ecologically protected environments, as well as the execution of tasks in ambitiously short deadlines.

Sweden is a country of 90,000 lakes, and more than half of its territory is covered with forest. This country maintains the highest standards of preservation of its natural beauty, but also of its urban areas. Our company is part of an environmentally conscious European family, and Elnos teams have worked countless times in environmentally sensitive areas.

Working while protecting the most endangered species

Preservation of naturally protected areas during the construction of the 130 kV Moliden-Sidensjö transmission line was one of the more well-known tasks by which our teams confirmed the highest level of professionalism in terms of environmental protection.
This is a transmission line, part of which stretches through an ecological area where the work rules are extremely rigorous. In one section of the route, movement was not allowed at all. The work was done in a protected ecological zone, which is the habitat of a plant species on the verge of extinction. We carried out part of the project by having the helicopter pull the rope over the poles, after which the machines stretched the conductors and fiber optic cable over the rope.

The construction of the 400 kV Hallsberg-Barkeryd transmission line in the area of wind farms and ecologically sensitive zones, the so-called Natura 2,000, required special imagination during work. 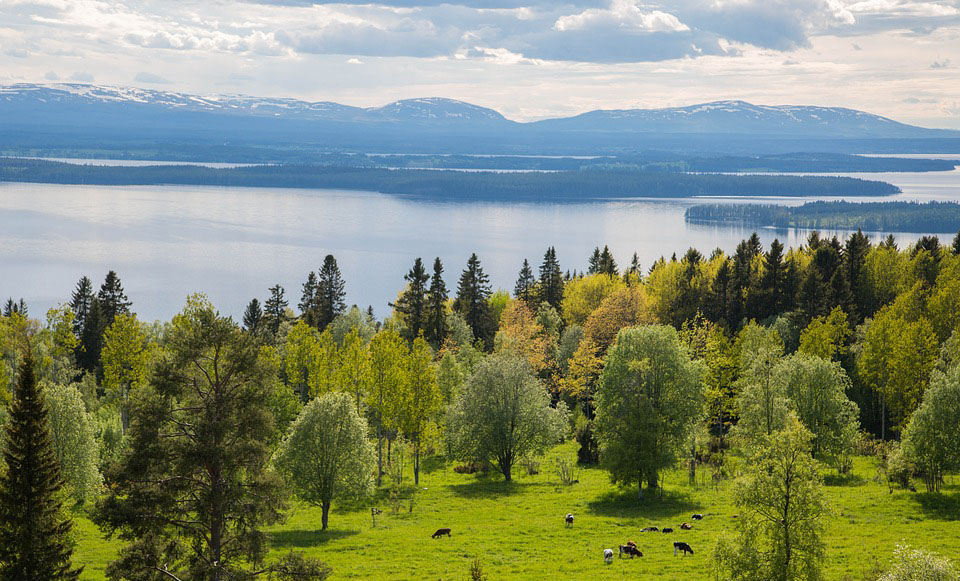 Considering that the use of vehicles, machinery or movement on the ground in general is prohibited in such zones, we carried out the work manually or with the help of a helicopter.