Triumph of the Elnos Serbia team on the Danube 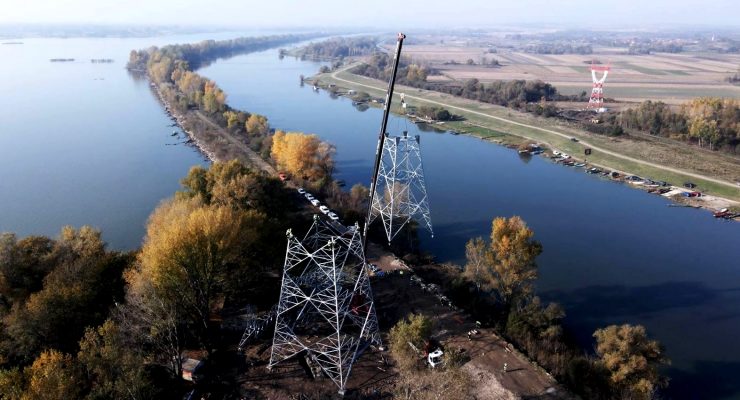 Elnos Serbia teams were part of a very exciting project that they will remember for a long time – the construction of a new 110 kV transmission line power connection across the Danube. In just six days, as long as the allowed suspension of the river navigation at the section from Bela Palanka to Rama, they successfully realized a very demanding mission.

The project of constructing a new, 34 kilometer-long 110 kV transmission line between SS Bela Crkva and SS Veliko Gradište, which is currently at its very end, included a very demanding stage related to the crossing of the new transmission line with the longest European river.

Elnos Serbia teams were in charge of performing all electrical assembly works and erecting a part of the transmission line structure, at this crossing.

Three backbones in constructing power connection above the river were three transmission line towers, two situated on the river banks and Danube–Tisa–Danube canal, and one central, which was constructed on the sandbank between canal and river.

The most demanding part of the work within this project was performed at the time full and temporary break of traffic on the Danube, which was supposed to be especially approved by Danube Commission from Budapest.

In this very short period, they completed works on erecting 61 meters high and 48 tons weigh central tower on the sandbank and then perform complex electrical assembly works.

Within the electrical assembly stage, our teams first finished the operation of transferring floating rope for an extension over the Danube, which is 730 meters.

With help of a rope, we successfully performed stringing work on the conductor and OPGW above the river, after which there was a phase of installation of diverters and protective balls.

Our teams successfully performed these works as well by driving special bicycles at 30 meters height over the water surface.

The whole endeavor is a very important project for the future stability of electrical power supply for the South Banat, and his investor is the company “Elektromreža Srbije “Belgrade.