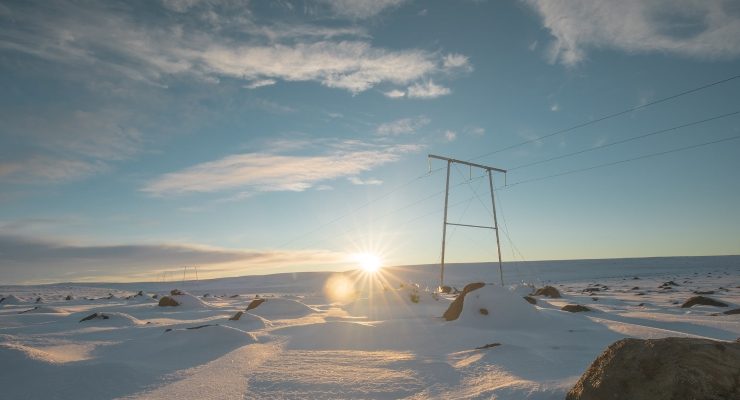 In parallel with this project, the Elnos Group began work this spring on the construction of the second new-generation transmission line in Iceland. It is a 220 kV transmission line Hólasandslína 3 which is across Akureyri to Holasandur in the northeast.

In this project, we are also in charge of the installation and erection of poles, as well as the installation of conductors. The route is extremely demanding and unpredictable, typically Icelandic, and includes valleys that are ecological and agricultural protected areas.

This season, we mostly dealt with jobs related to the poles. Out of a total of 184 poles on the 60 km long route, 118 were installed and 96 were erected. It is interesting to note that these poles are specially designed for the difficult weather conditions of the northern countries. These are tubular poles, up to 31 meters high, and each pole is so powerful that it replaces the five existing wooden poles erected more than 40 years ago.

We have also started electrical works, which have been completed at the 8 km route. Due to difficult weather conditions, the beginning of winter, and stormy winds, we are currently working mostly on the installation of poles.

The project aims are to improve energy efficiency, increase transmission capacity and ensure the stability of the electricity grid in the north and east of the country.

The role of the new generation of local lines

is intended to remedy many of the shortcomings that plague the main transmission system today. It will be operated at a higher voltage level or 220 kV instead of 132 kV and built from steel pipe masts that are more resistant to storms and icing and will therefore significantly increase the security of supply.